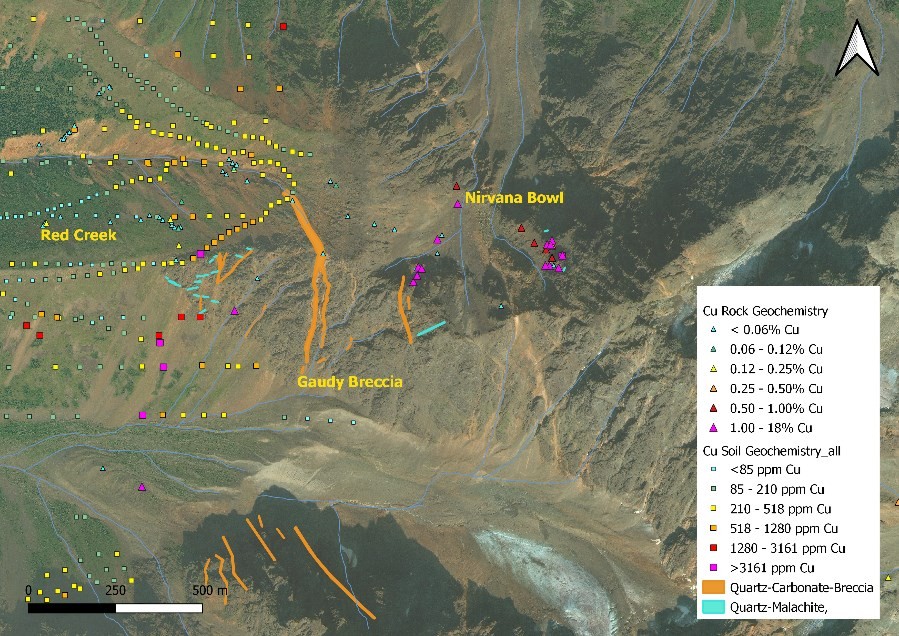 Vancouver, British Columbia–(Newsfile Corp. – July 20, 2022) – Mountain Boy Minerals Ltd (TSXV: MTB) (OTCQB: MBYMF) (FSE: M9UA) (“Mountain Boy” or the “Company”) announces that the field work underway is expanding the copper mineralized zones discovered last year. This work is directed at the Border Zone, an area that saw limited previous exploration as it straddled a property line before Mountain Boy consolidated the property last year. The Border Zone sits in the middle of a 6 km trend with evidence of porphyry-style mineralization previously identified to the north and south.

During the 2021 field season, numerous outcrop and talus samples grading more than 0.5% copper (up to 17.9%) were discovered 3.7 km southeast of the historic drilling at Dok in an area now known as Nirvana Bowl. (See the News Release December 13, 2021.) Work this season has discovered a series of epithermal-style veins up to 750 m west of Nirvana Bowl (Figure 1). The veins are interpreted to be related to an underlying porphyry system.

Two main styles of vein mineralization are observed, including quartz-carbonate hydrothermal breccia veins (Figure 2) and quartz-malachite>sulfide veins (Figure 3). The veins are hosted in a porphyritic to aphanitic andesite. Detailed photos of some of the representative styles of mineralization (Figure 4) include a) sample of massive sulphide, dominantly pyrite; b) massive pyrite with covellite; c) massive malachite>azurite>chrysocolla in a vuggy quartz vein.

Numerous felsic to intermediate intrusive rocks have been mapped in the vicinity of both styles of mineralized veins. Compositions range from rhyolitic to andesitic, including many porphyritic dykes. The majority of the dykes strike north-south, subparallel to hydrothermal breccia veins. Hydrothermal breccia crosscuts and contains clasts of recognizable dyke material. Dykes are variably altered, exhibiting both potassic and argillic alteration.

Lawrence Roulston, Mountain Boy’s Chief Executive Officer, said, “Ongoing field work continues to validate the presence of at least one center of porphyry-style mineralization. The presence of visibly high-grade copper mineralization associated with veins and hydrothermal breccias is indicative of proximity to a porphyry system and may well constitute a target in its own right.” 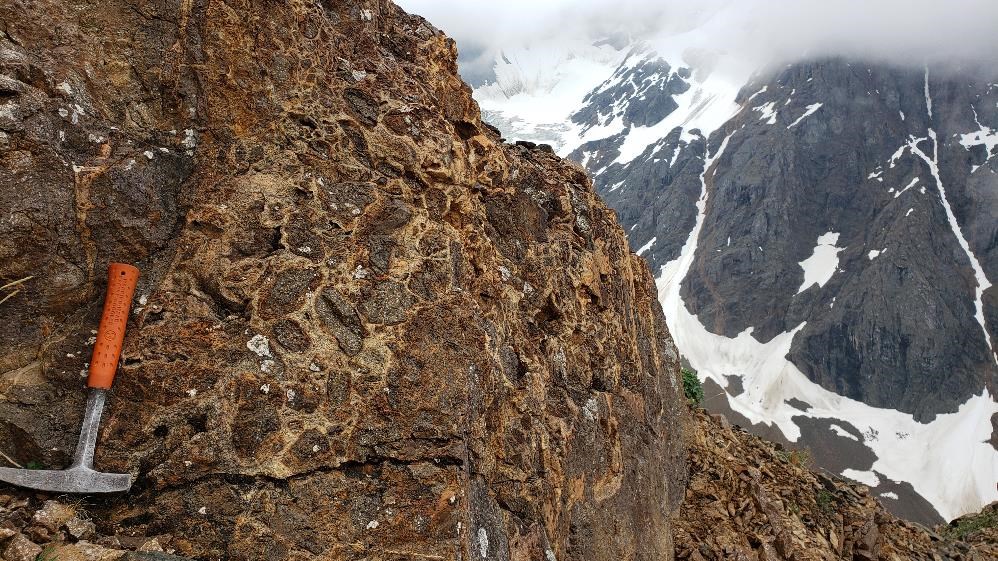 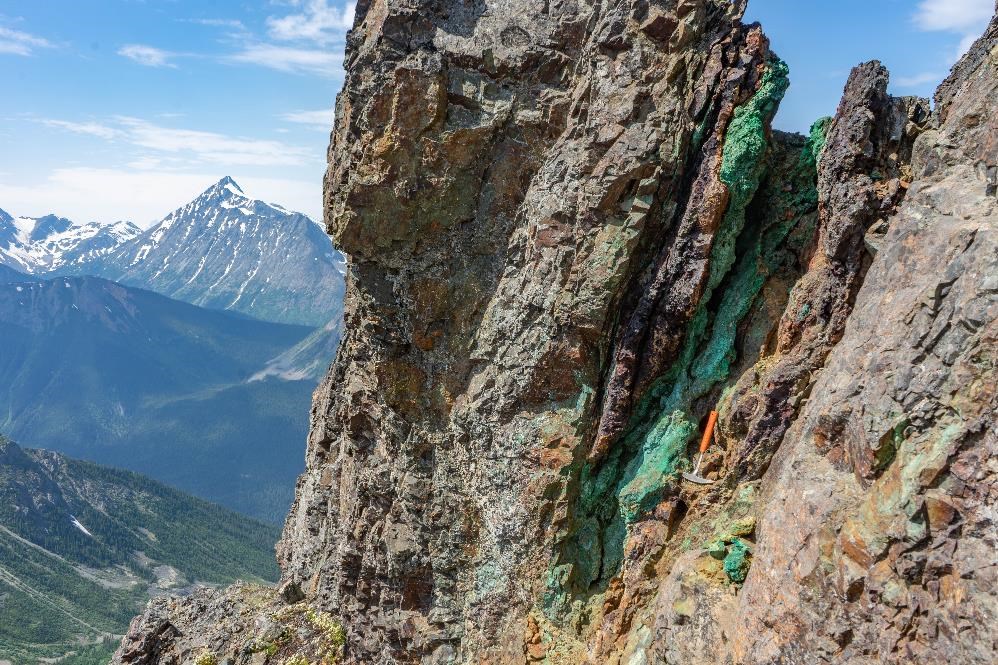 Other Targets on the Property

Several other targets are also being further explored, including the Strata Mountain Zone. A 4.5 sq.km area of gossanous weathering 4km east of the Dok target is currently being prospected and sampled with a view to assessing potential for porphyry style mineralization (Figure 4). Field observations to-date show that the area is occupied by a dense swarm of potassic altered dykes separated by very distinctive orange corridors of quartz-sericite-pyrite alteration of between 1 and 50m width. Within these corridors, zones of very strong gossan can be seen. In deeper incised areas the gossans are seen to be the result of intense supergene oxidation of up to 20% sulphide (including pyrite). Field observations indicate that the intrusive and hydrothermal activity occurred during the Early Jurassic geological period, associated with the bulk of the porphyry systems in the Golden Triangle.

The area has the visual characteristics and scale of a porphyry system, including the dyke swarm and the large areas of iron oxides after sulphides (now largely supergene oxidized). Work is underway to determine if this mineralized area is part of the same system as the Dok trend or is a distinct mineralizing system. 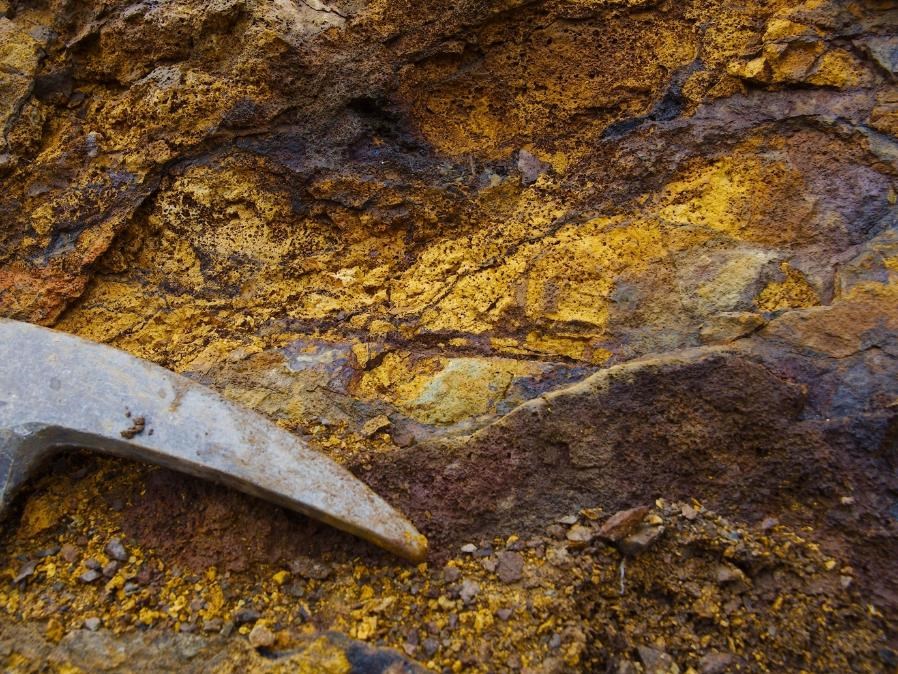 Figure 5 – Typical appearance of the strongly pyritic and supergene oxidized rocks located between members of the potassic altered dyke swarm.

The Company also announces the grant of stock options to its employees and consultants for an aggregate of 600,000 shares at an exercise price of $0.17 for a term of 5 years, expiring on July 12, 2027.

The technical disclosure in this release has been read and approved by Andrew Wilkins, B.Sc., P.Geo., a qualified person as defined in National Instrument 43-101.

On behalf of the Board of Directors:

Caroline Klukowski
This email address is being protected from spambots. You need JavaScript enabled to view it.
Tel: 604.763.8730